A Garden Grows in Juvenile Hall

With the help of the Center for Ecoliteracy, a narrow concrete courtyard is transformed into a sanctuary for solace and hope.

It's a chilly spring day in the Twin Peaks neighborhood of San Francisco.

At the city's Juvenile Justice Center (JJC), a group of teenage girls file into a narrow concrete courtyard, trimmed with barbed wire and open to the sky. They gather quietly around five raised beds of herbs and vegetables. Some look sullen; others look curious. But they all listen intently as their teacher talks about nitrogen, cover crops, and the life cycles of plants. After proclaiming their "garden names" ("Aster Angelina!" "Kombu Kim!" "Jumping Bean Jamilia!"), they pull on gloves and get to work.

"That's the smell of nature," says one student as she energetically digs up fava bean plants and turns them under into the soil.

Another student watches in dismay. "We're killing those things. Why are we doing that? I'm not a killer." She examines the lush mustard greens, ready for harvest, and reluctantly pulls one out. "These look perfect to me," she says. "They look alive. I don't want them to die."

Such offhand comments seem to have more meaning here at the JJC, where the students now shrieking over worms are in fact "youthful offenders" incarcerated 24 hours a day. Every year, more than 3,000 troubled teens go in and out of these doors, charged with the full range of criminal offenses — from running away from a group home to murder. Almost all are wards of the court or foster youth of color struggling with poverty, trauma, and violence; most of their time is spent sequestered in individual 10' x 7' cells. But with help from the Center for Ecoliteracy, a humble patch of green in Living Unit #8 is breathing new life into this regimented, supervised existence. For the first time, words like "beauty" and "nurturing" are starting to take hold. In a state with an 80-percent recidivism rate for youth, even the subtlest changes in the inner lives of students can have profound implications.

"As they learn to be gentle and care for such small things as bugs and plants, they learn to care for themselves and others," notes Megan Mercurio, an English teacher at the JJC's in-house school, Woodside Learning Center. "I think they already show more compassion and empathy toward each other. Gardening isn't just fun. It shows them how important it is to get along and work collaboratively to produce something good."

For many of the students, the garden has become a sanctuary of solace and hope. "It makes me happy and relaxed to look at the beautiful things we're planting and what they grow up to be," says 18-year-old Renecia. "Nobody would ever think of a garden in juvenile hall. When people look at us, they just see 'delinquents.' I feel like when we come in here, it brings us to a peaceful place. Plus, I like to weed. I like to pull out what doesn't need to be there so everything else has room to grow."

The garden is a truly tactile experience for 17-year-old Zhane, pregnant for the second time. "I'd never planted anything before," she says with a shy smile. "I like seeing the garden grow and express new stuff. I like feeling and smelling everything, seeing what I want to put in when I cook. And I like seeing the bugs." She pauses. "But if it's a snail or worm, I'm going to run."

Appropriately enough, the idea for this spot emerged organically — in the course of natural conversation among teachers and staff, all attuned to the growing school lunch reform movement. In fact, interest in creating a garden reflected the broader vision of Woodside teachers to integrate environmental justice issues into the curriculum. In need of long-term guidance, Mercurio, special education teacher Constance Walker, and other colleagues enrolled in the Center for Ecoliteracy's Leadership Academy in the fall of 2010. Designed to cultivate a deep understanding of ecological principles and systems thinking, the Leadership Academy assists educators in planning and implementing pioneering projects that advance education for sustainable living. Within a few months, it became clear that piloting the JJC's first-ever garden was the ideal project for the Woodside team. In January 2011, they met with Chief of Probation William Sifferman and presented their proposal.

Sifferman responded positively and asked to see a plan. With ongoing support from the Center for Ecoliteracy, the team worked together to figure out how best to turn ideas into action. For both teachers and students, a class research project that spring helped bring things to life. "The girls wanted to change how group homes worked because they had such a negative impact on their lives," recalls Walker. "They started to talk about their lives here, how they needed fresh air and space and green. We hadn't even shared the garden idea with them yet; they came up with it on their own."

Motivated by what they heard, Walker and Mercurio brought in a variety of seedlings for the students to choose from. After carefully planting her pick, each penned a heartfelt poem in its honor. Wrote one student to her Sunzilla: "Reach to the sun, don't be afraid, for that is the purpose from God you were made. Some nights may be long, and some days may be rough, but do not fret, you are built from strong stuff…" (Click here for the full text of the poem and other examples of student work.) While other classrooms followed suit with hydroponic boxes of edible and decorative plants, many yearned for more. It wasn't long before the focus of the students' research project shifted from probation and group homes to helping make the garden a reality.

In April 2011, the teachers were given permission to develop an inner courtyard into a garden space. "Almost every person had doubts when they saw it," admits Mercurio. "It doesn't look like anything could flourish here." Determined to make the most of what they had, they hunkered down, calling on master gardeners and honing grant-writing skills with the help of connections made at the Leadership Academy. Of course, unforeseen obstacles continued to arise, including the departure of three team members. "Constance and I don't have any background in gardening, but the others did," says Mercurio. "So we became the accidental leaders on this."

The deserted duo soldiered on, even visiting the garden at San Quentin State Prison for inspiration. "In a dismal place, the garden was this little green oasis," says Walker. "A guy was in there playing a guitar. The men walked around with us and pointed out the plants. It was much more spiritually uplifting there." Talking to the inmates reinforced the potential importance of such a spot for JJC youth. "They’re learning skills they can use upon their release," says Mercurio. "Many said that it would've been really beneficial for them to have the opportunity to grow plants when they were younger."

The teachers decided to "hire" their former students at Log Cabin Ranch, a detention facility in the Santa Cruz Mountains for youth charged with the most serious violent offenses. Led by San Francisco Conservation Corps instructor Kevin Jow, the Log Cabin students designed and constructed five raised beds. On November 17, 2011, they returned to the JJC in tool belts, hard hats, and overalls to install their handiwork, with Chief Sifferman himself working by their side. "There was a moment when the Chief asked one of the students to pass him a hammer," recalls Mercurio. "It felt so natural, but it was significant in a place where pencils are considered to be weapons. To see them passing a hammer back and forth as professionals was a real testament to the reform many of these youth had undergone."

Three months later, staff and students came together for an opening ceremony, featuring a commemorative poem, transplanting of starts, meditation circle, and introduction of "garden rules," created with the help of garden educator Elaine Walker, who conceived the initial curriculum:

By this time, almost everyone at the JJC was on board with the project — a feat for which the teachers give credit to the Leadership Academy. "We learned in the Academy to truly understand where people are coming from, then work with them in a respectful way," says Constance Walker. "I could tell you about so many instances where people said, 'We don't know what you're doing. Who do you think you are?' But when we offered more information about our goals and included their ideas in the process, it's amazing how many people came around."

Today, this once-barren courtyard is blooming with (delicious) life, including lettuce, kale, chard, and cilantro. The garden is integrated into science class every Wednesday; English class is spent planting, reflecting, and writing about lessons learned. And cultivating palates is a key part of the agenda, with frequent taste testings and the recent introduction of salads. "Getting exposed can transform what they eat," says Constance Walker. "They learn that what you eat can actually affect how you feel, how your brain functions. We have quite a few pregnant students, and they're very interested to learn about what good nutrition is."

Passion for the project continues to build, among not only teachers and students but the administration as well. Says Chief Sifferman, "I am now absolutely convinced that the overall transformational value this project has upon all youth who participate in this project, in any way, will extend well beyond the walls of our institution and into the hearts of the youth we serve." In March, he gave his blessing for the teachers to develop a large part of the JJC's mostly unused outdoor recreation area into a garden — an expansion made possible by a generous grant from TomKat Charitable Trust.

Having just completed their second year in the Leadership Academy, Mercurio and Constance Walker are visibly grateful for their success so far. "The Academy helped us understand our own power," says Mercurio. "We couldn't have done this without the Center for Ecoliteracy on so many levels. They've been an instrumental force, providing emotional support, financial support, and the wisdom of experience."

What's in store for Phase 3 and beyond? The teachers talk about reforming the JJC's food, selling produce to the community, and installing a garden in every living unit. But at the end of the day, it's the gradual impact on students' mental, social, and emotional well-being that matters most. "They always ask, 'When are we going to garden again?'" says Constance Walker. "They ask all the time. It's very difficult to be locked up in here. Not knowing how long they'll be here, where they will go once they're out — it's not an easy place. As an adolescent, you can imagine how much more that's magnified. It's so important for them to have a place where they feel a little less restricted, a little more human." 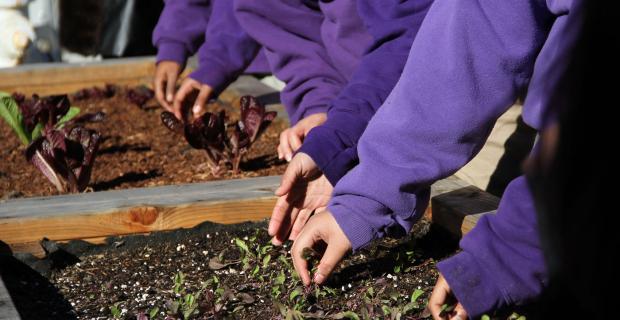 The Garden Brings Us to a Peaceful Place

Personal reflections from students on the importance of a garden at San Francisco's Juvenile Justice Center. 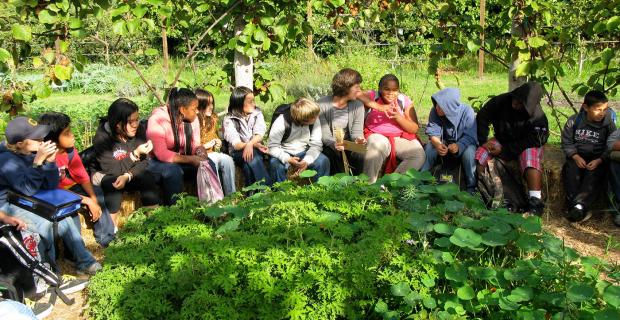 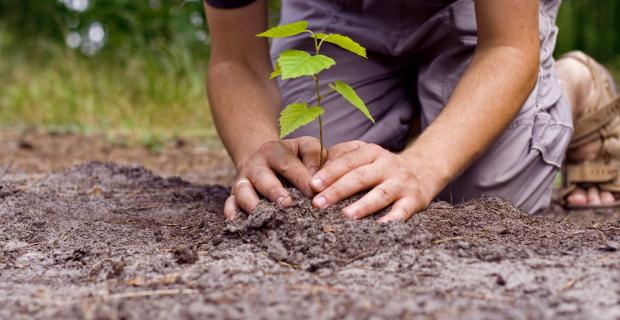 Getting Started with School Gardens