With the help of his teacher, Dee Uyeda, he used his imagination, created a watercolor painting, and called it "Tenderness of Cranes." Along with the rest of his class, he entered his art piece into the 2001 International River of Words Environmental Poetry and Art Contest.

But the best part — winning the contest's Shasta Bioregion Prize — was icing on the cake.

Christian Jordan exemplifies one of hundreds of students whose teacher participates in the STRAW Project. Facilitated by the Center for Ecoliteracy and The Bay Institute, the STRAW Project, or Students and Teachers Restoring a Watershed, coordinates and sustains a network of teachers, students and community members as they plan and implement watershed restoration projects that include water quality monitoring, habitat mapping, riparian restoration, and bird and aquatic insect monitoring.

Participating teachers such as Ms. Uyeda receive training in environmental project-based learning throughout the year as well as during STRAW's annual end-of-summer training known as Watershed Week. During this week, teachers are given a choice of workshops to attend, from a restoration site tour to a workshop focused on birds. Looking to incorporate nature and art into her classroom, Ms. Uyeda chose to attend the River of Words Workshop, where she learned about the hands-on classroom and field activities that produce nature-based poetry and art.

Christian Jordan is thankful she made that decision.

A Winning Watercolor, with Black Pen
Tenderness of Cranes. The soft title itself flows off the tongue like water trickling from a slow, meandering stream. Long and graceful, cranes symbolize good luck and long life in Japanese culture. In Dee Uyeda's third grade classroom at Park Elementary School in Mill Valley, California, magical angel-cranes peer down from above the students' desks, products of Ms. Uyeda's origami paper folding lessons and the students' dexterous work.

This watercolor painting sets the scene for a variety of cranes, each in a slightly different posture: one eats fish, several fly, some sit, a few groom. By showing many cranes in different activities, Christian articulated a unique understanding about crane behavior and his relationship to cranes.

The mountainous backdrop of the piece portrays most likely the higher elevations of Central and South Asia's Himalayan mountain range, where sacred Asian temples known as pagodas dot the landscape. When I asked Christian for some insight into the painting's pagoda, he explained. "In lots of artwork I do, I like to put houses or a temple in lots of times."

Christian drew the elusive object of water as a waterfall cascading over the mountain, like a flowing, blue road. Particularly interesting is the mass of blue where water meets the river or ocean, for swimming about the water are small fish, adding an apt circle-of-life theme to the painting. Cranes mandate these tasty and nutritious morsels in order to survive.

Lastly, a single tree, perhaps a sub-alpine conifer, sprouts up from the mountain's slopes.

"It's a lovely painting," said Pamela Michael, director of the River of Words International Art and Poetry contest. River of Words was created to promote watershed awareness, literacy and the arts. Each year, in affiliation with the Library of Congress, ROW conducts a free poetry and art contest for international youth, designed to help them explore the natural and cultural history of their local watersheds and to express, through art and poetry, what they discover.

Christian attributed many of the painting's qualities to Ms. Uyeda at the awards ceremony. When Robert Hass, former U.S. Poet Laureate and cofounder of River of Words, asked Christian how he came to his title, Christian pointed to his teacher. "One of the songs played during our morning stretches and exercises was called 'Tenderness of Cranes'," he said. "I thought about it a little, but my teacher had a book about cranes and on the front there were two cranes and that's how I got the idea."

Originally, Christian hoped to give the painting to Ms. Uyeda as a gift. His mother, Debra Jordan, learned from Park Elementary School that her son was reluctant to enter the painting into the contest because he realized that any submission made to River of Words was not returned. Ultimately, Ms. Uyeda made a color copy of the painting for Christian to keep, so he went ahead and entered "Tenderness of Cranes" into the contest.

"The painting has a spiritual quality to it," says Christian's mother Debra. "And the fabulous thing about Ms. Uyeda is that she has been such an inspiration this year. I think this piece comes from a special connection between the two of them. Christian has an artistic gift, maybe, and she helped bring it out of him."

Who Says a Teacher Doesn't Matter?
It would be fair to say that Dee Uyeda's students live the artist's life in her classroom, both inside and outside Park Elementary School. Dee Uyeda's Japanese heritage and 34 year tenure in the Mill Valley School System reveals her teaching commitment and unique sensibilities.

At the start of school, the children take off their shoes and line them up neatly before coming into the room. Next, the children practice Haiku, an ancient form of Japanese verse. In Japan, Haiku consists of three non-rhyming lines with a specific syllabic count. English, however, does not lend itself so neatly to its traditional structure, so students in Ms. Uyeda's class concentrate on the thought of the Haiku: the poet describes one moment, one feeling, one object that catches the eye. The poet tries, in just a few words, to give the reader a glimpse of that moment — the here and now, the quiet and small moments of life.

"The sights and sounds of our culture all vie for attention with each other, so many times children don't notice trees and water and landscape," explained Ms. Uyeda. "So, you have to help them find the magic, by showing them and helping them observe, reflect and write."

After talking more about how big and bold American culture seems to be, she recited her favorite David W. Orr quote: "Before their minds have been marinated in the culture of television, consumerism, shopping malls, computers and freeways, children can find magic in trees, water, animals, landscapes, and their own places."

With the help of the STRAW team, Dee Uyeda's third-grade class learned the need to care for and become stewards of Warner Creek, next door to their school. STRAW's support group visits participating schools several times during the school year to help teachers and students with watershed activities.

Known previously to the students as a limitless, to-be-trampled-upon playground, Warner Creek's role soon shifted to one of martyr. Collectively, the group became involved in the restoration of native plants around Warner Creek. They also learned why the fish population had dwindled in the creek through time. The students' awareness grew along with Ms. Uyeda's: concern for the creek precipitated both restoration efforts and contemplative art.

Exposure to the STRAW Project has renewed Dee Uyeda's vigor for teaching. Teachers are always seeking out this type of professional development, and the eagerness with which they attend Watershed Week exemplifies that sentiment. "Teachers crave innovation, want to bring new ideas and techniques into the classroom. They are hungry for it," attested Sandy Neumann, Program Officer for Education at the Center for Ecoliteracy. "Ecoliteracy has many different aspects to it, including food and water, but respect for human dignity and meaning, understanding that everyone has something to offer, and trying to figure out what that is, remains our most important job as teachers and learners."

This does not go unnoticed by the folks at River of Words. Pamela Michael added, "Clearly, the more River of Words implementation is grounded in hands-on, real work and exploration in the watershed and not just 'Okay, kids, it's time to write our watershed poems for the contest this year,' the more grounded the project is in the curriculum, the life of the school, the community and the watershed. And more winners and finalists are generated because the kids are working from a real understanding and connection to the watershed. It shows in the art."

Learning Embedded
Through the arts, a child becomes accountable for his or her emotions and shows newly-formed knowledge. You know when you see art produced that a child has had an experience that's going to shift them, shift the way that they see the living world for a long time to come.

In giving that art up to the contest, children like Christian also learn to take a risk, to do something they are unsure about, but believe is right.

Displayed over a computer projector and onto a large screen, Christian's painting dazzled at San Francisco's Public Library. The formula for success? Watercolors, a black pen, a book about cranes and some creativity.

And future work? He sighed, "Mountains and paintings of pictures with water in them; that should be just fine."

Christian and the other poetry and art contest winners reveled in the accolades placed upon their work at the awards ceremony. But a more significant moment came when everyone at the ceremony took a minute and stood up. Collectively, they applauded all the teachers present and thanked them for their hard work and inspiration. It was a wonderful moment. 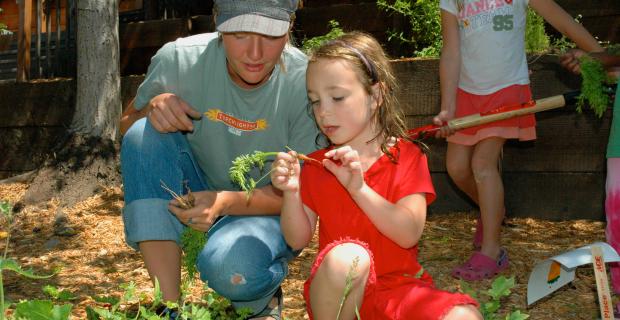